Very good review of the human tragedy, nice to see someone speaking out from an established position.
A UK version of Prof. Guy McPherson, still working and allowed to lecture for now that seem the difference between the UK & US, where the machines (corporations) have absolute control.
IMO all part of the NWO / Agenda 21 bull that we are fed by old fashioned lies from our elites.
http://www.youtube.com/watch?v=RInrvSjW90U&feature=player_embedded
http://www.bristol.ac.uk/cabot/events/2012/194.html
Posted by "e Brutto" at 08:49 No comments:

All is young, no more than this tide. 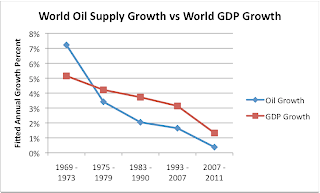 Why the banksters don't lend to business.

All business new and old is becoming less profitable.

Pronouncements on the importance of growth is a form of madness - denial.

Banksters can get a guaranteed income just by holding the money given to them by governments and placing it in government vehicles for cash.

Lending money back to government also removes banksters debt exposure risk by securing future monetisation of the debt.
The less lent the more credit government will supply to try and achieve velocity.
Further co-joining the futures of governments and banks.

Reaching velocity is a probability game as the effects of asset deflation / resource  inflation become greater in the economy, efforts to increase moneys availability become more overt until der plebs get the message of inevitable monetisation and start acquiring tangible assets.

Deflation of static assets like a house as the earning potential of its occupants is progressively reduced on the world market and inflation in the prices of resources that are bought in the same with devalued currency.

The West must decline in terms of real economic output, costs are > cf. the East so  oil will flow in that direction as they can turn a bigger profit from the same energy.
Globalisation provided the means for the world elites to disenfranchise the West's population by freely transferring capital and technology.

The idea that knowledge based industries create wealth and is the future of the West is bunkum for the masses, access to ever increasing energy flows fueled the industrial revolution, the rest is self serving propaganda.

Disenfranchised populations have and are still war fighting to maintain the elites control of energy and resources, now with an ever smaller piece of the pie in return - you may have noticed food packet sizes are shrinking, mentioned on BBC radios long running drama 'The Archers'.

What we need is a currency that decreases in size as the GDP shrinks, along with a shrinking population.

The tide is going out.

Nothing to see here

Mr. Freeze, give yourself up. We can get help for you... medical help! - Batman 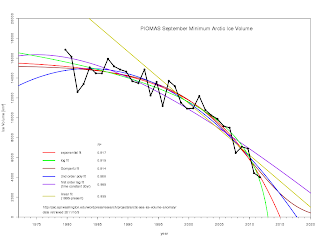 This ice volume chart is enough to raise the hairs on the back of my neck.

Interested in Le Temps?
As usual the mass media are not reporting anything approaching real 'news'.

To get a handle on what is really happening you must watch this Arctic amplification lecture from Jennifer Francis, Rutgers University.
A good exposition she is a bit shaky on a few points but the central theme is right on in my opinion i.e. the Jet Stream (Rosby waves / bands) is weakening due to missing Arctic ice cover esp. since 2007:
the Jet Stream used to keep Arctic cold bottled up by forming fast circular weather systems over winter;
warm weather moving North and warmer in the South;
less temperature difference between Arctic and lower latitudes as the overall temperatures rise especially quickly in the Arctic;
slow moving weather systems care of the weakened Jet Stream allow extreme weather of all sorts to form.
http://www.youtube.com/watch?v=RtRvcXUIyZg


There are other processes at work positive feedbacks are hypothesised to be kicking in about now, a key one is reduced mixing of cold and warm ocean currents.
So the surface gets heated more but transfers a smaller proportion of the heat to the deep water where it would be unable to impact surface temperatures for a time period.
This could be a contributing factor (the Gulf Stream) to the 5-10 years doubling time for Greenland melt water volumes.
Combined with Greenland and the Eastern US coast being in an area that typically forms an inflection point for the Jet Stream as it swings North marking a top of the evolving boundaries.

More on the same lines all worth watching the main interview starts at ~23m featuring an interview with a scientist that quotes the doubling time of 5 -10 years who has been to Greenland recently and returns shortly.
http://www.youtube.com/watch?feature=player_embedded&v=vWARYfLnDXI

"wish I didn't know now, what I didn't know﻿ then"
http://www.youtube.com/watch?feature=player_detailpage&v=Bi79wy97Wug
Posted by "e Brutto" at 17:22 No comments:

It all seems to be happening right now

It all seems to be happening right now:
coordinated clamp downs on copyright, more intrusive info gathering policies;
M.M. News output resembles stilted propaganda;
sweeping away objections to new dirty oil and gas extraction;
approval for nukes in the UK;
demonising the poor;
and extension of perpetual war to support the $.
http://www.youtube.com/watch?v=JzNc5XnN8-s&feature=related

The risk of devaluation (bank holiday) was mentioned by Eric Sprott a couple of days ago.
I concur: devaluation is another version of inflation / deflation both reduce purchasing ability by reducing how much 'real' money is available - purchasing value.

The most pressing risk for an individual IMHO is to get caught with money in the bank only to find it is then worth a fraction of past value relative to other currency.
In conventional economic theory you should hold on to any debt you have on a mortgage in this scenario.
However, inflation of costs will not lead to wage compensation as the increasing energy flows required are not available domestically (US, UK, EU) or for import.
Profit margins on imported oil are inadequate to compete with cheap wages and poor environmental conditions elsewhere.
Historically we could monopolise oil assets of others this is now too expensive to achieve not least due to these countries expansion of an oil fed population.

Assets to be valid must be traded world wide into areas that still have available energy surpluses or pay workers less / produce goods more efficiently like Germany or China.
Worldwide gold / silver prices overall (despite manipulation) increase in some relation to world levels of fiat currency if well below totals due to central bank interventions using computer trading and metal leasing techniques.
Shame as long term unemployed all I can do is hoard a few jars of peanut butter - its the thought that counts - LMAO.

Unlike the 1970's having a large mortgage debt will likely lead to default rather than paying off the mortgage.
High inflation rates lead to high interest rates, look at the price governments have to pay for their debt recently.
Higher rates will suppress the housing market reducing the market value.

This is what should happen given that the West is a net energy importer spending by inflating its currency to fill the gap that can never be filled due to Peak Oil.
Total real money must decline in relation to resources just not linearly due to the buffering effect of inflated fiat currency.

Unless of course TPTB declare a debt Jubilee ;¬) (default), for a variety of reasons that is not going to happen other than by a general collapse of society, well IMHO.


http://www.youtube.com/watch?v=xuOnePNlOgY
Posted by "e Brutto" at 11:24 No comments:

Keep me in luxury :¬)

Zero Hedge - seemingly with the 'project', have look at the home page and make your own mind up

The Oil Drum - Caveat seems taken over by the MIC recently

Our Finite World - Gail the actuary from The Oildrums glory days

RT - Russia Today on YouTube, this is owned by the regime so use your loaf

Press TV - Iranian, this is owned by the regime so use your loaf

AlJazeeraEnglish, controlled by the regime use your loaf